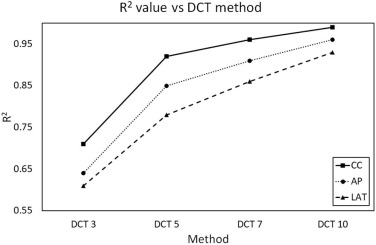 To use Discrete Cosine Transform to include tumor motion variations on ITV definition of SBRT patients.

Data from 66 patients was collected. 2D planar fluoroscopy images (FI) were available for 54 patients. Daily CBCT projections (CBCTp) from 29 patients were employed to measure interfraction amplitude variability. Systematic amplitude variations were obtained from 17 patients with data from both FI and CBCTp.
Tumor motion curves obtained from FI were characterized with a Cosine model (CM), based on cosine functions to the power of 2, 4 or 6, and DCT. Performance of both models was evaluated by means of R2 coefficient and by comparing their results on Internal Target Volume (ITV) margins against those calculated from original tumor motion curves.
Amplitude variations from CBCTp, as well as estimations of baseline shift variations were added to the DCT model to account for their effect on ITV margins.

DCT replicated tumor motion curves with a mean R2 values for all patients of 0.86, 0.91 and 0.96 for the lateral (LAT), anterior-posterior (AP) and cranio-caudal (CC) directions respectively. CM yielded worst results, with R2 values of 0.64, 0.61 and 0.74 in the three directions.
Interfraction amplitude variation increased ITV margins by a 9%, while baseline shift variability implied a 40% and 80–100% increase for normalized values of baseline shift of 0.2 and 0.4 respectively.

Probability distribution functions of tumor positions can be successfully characterized with DCT. This permits to include tumor motion variablilities obtained from patient population into patient specific ITVs.