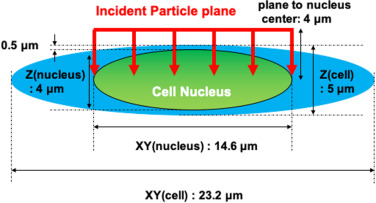 Track structure Monte Carlo (MC) codes have achieved successful outcomes in the quantitative investigation of radiation-induced initial DNA damage. The aim of the present study is to extend a Geant4-DNA radiobiological application by incorporating a feature allowing for the prediction of DNA rejoining kinetics and corresponding cell surviving fraction along time after irradiation, for a Chinese hamster V79 cell line, which is one of the most popular and widely investigated cell lines in radiobiology.

We implemented the Two-Lesion Kinetics (TLK) model, originally proposed by Stewart, which allows for simulations to calculate residual DNA damage and surviving fraction along time via the number of initial DNA damage and its complexity as inputs.

By optimizing the model parameters of the TLK model in accordance to the experimental data on V79, we were able to predict both DNA rejoining kinetics at low linear energy transfers (LET) and cell surviving fraction.

This is the first study to demonstrate the implementation of both the cell surviving fraction and the DNA rejoining kinetics with the estimated initial DNA damage, in a realistic cell geometrical model simulated by full track structure MC simulations at DNA level and for various LET. These simulation and model make the link between mechanistic physical/chemical damage processes and these two specific biological endpoints.

]. However, in the study by Tang, the agreement of the calculated SF and experimental SF measured by Belli et al. [
[36]
RBE-LET relationships for cell inactivation and mutation induced by low energy protons in V79 cells: further results at the LNL facility.
Int J Rad Biol. 1998; 74: 501-509
] had been demonstrated in only one specific condition (LET 7.7 keV/). In this study, we integrated a more sophisticated approach into the Geant4-DNA application. We attempted to achieve agreement between the calculated SFs and the experimental SFs in a wider LET range (7.7 – 37.8 keV/) and also to reach agreement with the experimental data when calculating the fraction of unrejoined DNA [
[37]
DNA DSB induction and rejoining in V79 cells irradiated with light ions: a constant field gel electrophoresis study.
Int J Rad Biol. 2000; 76: 1095-1104
], simultaneously.

The probability of cell death at a specific irradiation condition depends on the irradiated cell line, since the capacity and the speed of the repair process against DNA damage can vary among cell lines. Therefore, in the TLK model, the model parameters that represent the repair speed and the lethality must be optimized for each cell line separately. For the present study, we introduced the parameter-reduced TLK model (six parameters) under the same assumptions as in the original study by Stewart [
[34]
Two-lesion kinetic model of double-strand break rejoining and cell killing.
Rad Res. 2001; 156: 365-378
]. In this work, we optimize the TLK model parameters for the V79 cell line (described in Appendix), using simulated DNA damage and its complexity given as inputs in the TLK model.
In the following sections, we first summarize how we estimate the initial DNA damage and its complexity (Section 2.1). We then briefly describe the TLK model (Section 2.2). Finally, we address the validation of the integrated application, calculating the fraction of indirect damage in various proton fields of interest (Section 2.3). Of note, all developments and simulations are based upon Geant4 version 10.4.patch2. This application will be released as an example of the Geant4 code in an upcoming version.

3.1 Number of initial DSBs after irradiation

Fig. 2 shows the yield of DSBs categorized as DSB, DSB, and DSB expressed as the number of breaks per unit absorbed dose (Gy) and per unit of DNA fiber length (Gbp). The yield of DSB increases with the decrease in the incident proton energy, whereas the yield of DSB and DSB is slightly decreasing. We repeated the same simulations without the chemistry interface to calculate the same yields created by direct action. All yields created by direct action were simply increasing with the decrease of the incident proton energy. The total yield of DSBs (DSB+DSB+2DSB) was almost consistent with the previous simulations [
[22]
Fully integrated Monte Carlo simulation for evaluating radiation induced DNA damage and subsequent repair using Geant4-DNA.
Sci Rep. 2020; 10: 20788
]. For instance, the total yield of DSBs at 5.04 MeV in this study is 7.02 Gbp−1Gy−1 and was about 7.3 Gbp−1Gy−1 at 7.0 MeV, although the geometry of the simulations was slightly different.

The optimized parameters of the TLK model for V79 cell line are listed in Table 1. The repair rate of the fast-repair process was about 1.19 h−1, and its half-repair time was about 35 min. Similarly, the repair rates were approximately and h−1, for the slow repair and binary repair, respectively. In addition, the corresponding half-lives were 12 days and 22 years, respectively. The probability of the misrepair in the slow repair leading to cell death was approximately 16 %. The probability for fast-repair () was fixed at 0 % and that for binary-repair () at 100 % at the maximum probability as the result of the optimization.
Table 1Optimized repair parameters for V79 cell line.

The fractions of unrejoined DSBs are shown in Fig. 3. As shown in the left panel of the figure, the TLK model was able to reproduce the time evolution of the measured relative FAR (fraction of unrejoined DSBs). This is not surprising, as the data set is involved in the optimization of the TLK model parameters. On the contrary, the fractions with 0.88 MeV protons at the cell entrance level were not in agreement with the measured data that are not involved in the optimization, as shown in the right panel. This is caused by the limitation of the TLK model, which will be discussed in Section 4. It is worth noting that even if we include the data set for 0.88 MeV proton in the model parameter optimization process, it is not possible to obtain agreement with both measured data sets. For this reason, if we include both data sets in the optimization, the predicted model curve will be almost at the center in between these two data sets.

Fig. 4 shows the cell SF as a function of the delivered dose for each proton energy at the cell entrance (and the unrestricted LET value at cell midplane). Using the optimized parameters listed in Table 1, the calculated survival curves are in a reasonable agreement with the measured fraction, although the calculated value underestimated the SFs at the highest energy (5.02 MeV). In addition, at the lowest energy (0.70 MeV), the calculations also underestimated the SFs in the high-dose domain (3 Gy). This underestimation in the high-dose domain is well known as a “stochastic effect” [
[33]
Cell survival fraction estimation based on the probability densities of domain and cell nucleus specific energies using improved microdosimetric kinetic models.
Rad Res. 2012; 178: 341-356
].

By integrating the TLK model into a Geant4-DNA radiobiological application, we successfully reproduced both the DNA rejoining kinetics at low LET and cell SF, simultaneously. This is the first study to develop a mechanistic model correlating both the cell SF and DNA rejoining kinetics with the estimated initial DNA damage in a realistic cell geometry simulated by track structure MC simulations at DNA level for various LET, thus, linking mechanistic physical/chemical damage processes and biological endpoints. We note three limitations of this study, which should be considered for further investigation. (1) We need to consider the second-repair process (and/or aborting repair) after the first-repair process fails. (2) To evaluate the cell’s repair performance, the maximum time range should be extended until a time at least comparable to the half-life of the slow-repair process. (3) To reduce biasing of the optimization, it is preferable to have more measured data obtained with higher energies protons.

The model parameters in Eqs. ((4), (5), (6)) were optimized for the V79 cell line in a manner consistent with the six experimental SF curves and one relative FAR curve. To optimize the parameters and solve the optimization problems, we used Ceres Solver [
[59]

], which is an open-source C++ library based on a nonlinear least-squares method for solving optimization problems. In general, to solve the linear least squares problem form for the parameters , we need to determine the minimum of the key computational cost using the following formula:
(A.1)
where is a matrix of an -dimensional vector of variables (the number of data points), and -dimensional function of (the number of optimized parameters), whereas is the Jacobian. We select SPARSE_NORMAL_CHOLESKY as the algorithm of the Jacobian factorization, given that the optimization problem is usually sparse. The residual cost for each data point was calculated as with the same weight for all configurations of both the SF and relative unrejoined DSB, where was calculated as the value with simulated DSBs.
For the optimization, we had limitations on both the model side and experimental data side. On the model side, the parameter-reduced TLK model considered fast-, slow-, and binary-repair processes. All the damage were rejoined, once the damage was repaired through one of these repair processes (regardless the repair has succeeded or not), even when the repair failed. Additionally, the model did not consider second repair processes for the damage that could not be repaired during the first repair. Given the limitation, one unrejoined DSB curve was excluded from the optimization, although, in the experimental study by Belli et al. [
[37]
DNA DSB induction and rejoining in V79 cells irradiated with light ions: a constant field gel electrophoresis study.
Int J Rad Biol. 2000; 76: 1095-1104
], two unrejoined DSB curves were available. This has been discussed in Section 4. On the data set side, the maximum time range of the unrejoined DSB curve was about 2 h from the irradiation. However, the speed of slow- and binary-repair was much slower (for instance, it takes dozens of hours to repair DNA damage via the HR process [
[60]
Comparison of nonhomologous end joining and homologous recombination in human cells.
DNA Rep (Amst). 2008; 7: 1765-1771
]). Thus, the reference data are not so sensitive toward the parameter optimization for the slow repair processes. Because of these limitations, we restricted the value range of all model parameters and set equal to 0.0, similar to that in the original study by Stewart [
[34]
Two-lesion kinetic model of double-strand break rejoining and cell killing.
Rad Res. 2001; 156: 365-378
]. In this study, the parameters were adjusted for optimization, subject to the following constraints: (equivalent to a 83 minutes and 4 minutes half-life, respectively), (equivalent to a half-life of 17 years and 83 minutes, respectively), (equivalent to a half-life of  years and 17 years, respectively), set to 0.0, , and .